Land Lotteries and the Persistence of Inequality 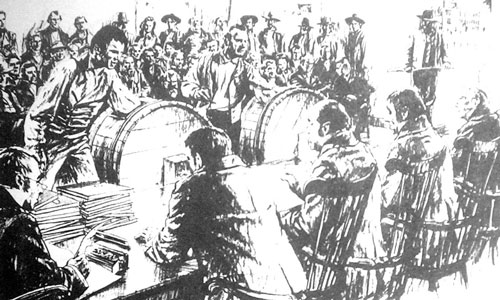 An enduring question in social science is the degree to which poverty is a self-perpetuating trap rather than a reflection of more fundamental characteristics.  By definition, the poor have less wealth, but is there also a vicious cycle in which not having wealth limits a person’s ability to make productive investments that help him/her escape from poverty?  The standard approach in economics is to think of wealth as the budget constraint, which determines the set of feasible consumption.  In a world where capital markets are perfect, wealth determines how much you can consume, but it does not affect the efficiency of investments that you make. In contrast, if we depart from this perfect-market assumption, people without wealth may find it impossible to make high-return investments in themselves or in their children.

But if we see in the cross-section that those with more wealth undertake more investments, it does not necessarily mean that wealth relaxes the constraint on investment. Some might also have access to better investment opportunities in human or physical capital. Further, these differences in opportunities might persist across generations.  Herein lies the difficulty in determining whether family wealth is an important input to producing human capital, or simply an indicator of higher underlying productivity.

In a series of papers (co-authored with Joseph Ferrie of Northwestern), we examine some unusual episodes in U.S. history: land lotteries.  In the early 19th century, Georgia opened almost three-quarters of its total land area to white settlers in a series of lotteries. This was an unusual land-allocation method, chosen for its sheer transparency in the wake of several tumultuous corruption scandals in Georgia in the 1790s.

These episodes provide something rare in the analysis of the impact of wealth on behavior: a shock to wealth that is decoupled from differences across individuals in productivity.  We assess the impact over several generations of a large, exogenous random shock to wealth. This newfound wealth would have relaxed the supposed constraint faced by poor individuals and allowed them to make investments (that they would not have otherwise been able to afford) in their own capital stock or in the human capital of their children.

First, we ask whether the lack of wealth constrains parents’ investments in the human capital of their descendants.  Although winners had slightly more children than non-winners, they did not send them to school more. Sons of winners have no better adult outcomes (wealth, income, literacy) than the sons of non-winners, and winners’ grandchildren do not have higher literacy or school attendance than non-winners’ grandchildren.  This contrasts with the strong cross-sectional relationships in the same population between wealth and a whole range of child outcomes.  This suggests only a limited role in this environment for family financial resources in the formation of human capital and a more important role for other factors that persist through family lines.

In future work, we will also examine the effects on mortality from the wealth windfall as well as investigate aspects of the network structure to examine the importance of social capital in changing the returns to wealth shocks.  Additionally, we have collected data from a smaller land lottery in southwest Oklahoma (in 1901) to conduct a parallel analysis of a lottery almost a century later.