​Kathy Velikov is a designer, an academic, and an architect.

As Professor of Architecture and Associate Dean for Research and Creative Practice at U-M’s Taubman College of Architecture and Urban Planning, when a colleague reached out to her to see if she would be interested in designing a new space for the Stone Center for Inequality Dynamics (CID) at the Institute for Social Research building, she saw it as a great opportunity.

“We took the studio model that architects use in collaboration and applied that to the Stone Center for Inequality Dynamics to create a new space for CID,” she explained. “We used an inclusive design process where CID students were able to be a part of the creation of the space. They had input in what they wanted, helped come up with the frameworks to be able to shape their own lab.”

“The work that I do ranges from material architecture, to architectural research in building design, and urban design that looks into the intertwining factors between the built environment, technologies, ecologies, and society,” she said.

Fabian Pfeffer, CID Director, reflected on their collaboration noting that “working with Kathy has been wonderful. Her way of shepherding a democratic design process was such a great fit with our own vision of creating a more equitable and inclusive space that supports new forms of collaboration and feedback.”

Through the creation of the new CID space, Kathy and her team discovered more about the mission of the center. They found their two groups had crossover in research and areas of work.

“Fabian and I have a lot of overlap in our research areas, especially around some of these questions of inequality and access. Sociologists and architects may approach these questions from different sides, but we reach the same center.”

“There are also similarities in technique,” she said. “We use a lot of mapping and analysis in our work to understand situations… to visualize them. We tell stories through maps and drawings that describe these conditions. So, when we had the opportunity to collaborate further, we seized the chance.”

Kathy said the partnership with CID felt like a natural fit because of the range of her work and emphasis on connections.

“Architects are always thinking forward. What’s been really interesting about working with CID is that it’s been great to be able to understand situations from those who are trained to unpack and analyze them through different methods. Architects and designers need to understand social dynamics but are often limited in this capacity because we have different skills, training, different ways of thinking, and methods of analysis,” she explained.

“The more that different disciplines can come together around these kinds of complex questions … it is something we really need. And it can be very powerful.”

How do architects fight inequality?

By ensuring buildings, streets, and spaces are created and designed in accessible, inclusive ways, Kathy and her team keep equity and equality at the forefront of their work.

Kathy’s research focuses on urban inequality, such as mapping areas of dispossession and marginalization. In some of her recent projects, she researches access to food, health, learning, and mobility, and with partner Geoffrey Thün develops spatial prototypes and urban strategies that can improve those conditions.

“The way I approach inequality as an architect is that we look at the complicity of the built  environment in producing and reproducing these unequal conditions. How might the built environment be transformed through assembling complex actors, institutions, programs, and designs to provide more access to resources and improve the built environment for communities?” she asked.

Kathy studies how urban realms are designed and built. “Through my teaching and research, I have been studying housing and different ways to design cooperative models of housing. We look at different forms of ownership in housing as a way to increase equity.”

“For me, it always comes back to this: how does equity manifest in the form and design of space, and how can equity be physically and spatially designed?”

The built environment may create or reproduce inequalities

“There is an infamous project from the 1950s, the Pruitt-Igoe public housing in St. Louis, that is often used as a classic example of a built environment producing inequalities. While the failure of this project was ultimately due to many interacting factors, such as serious issues with public housing policy and the operations management of the project, its built environment is also one we can study in terms of reproducing inequality. For example, the series of housing blocks were placed too close together, had very small windows, small doors, and an overall lack of generosity in the ground plane,” she said. “It was also a modernist planning idea to locate streets around the perimeter of the complex as opposed to through the center. What that created was a built environment where the residents had a hard time maintaining security, no one took ownership of the ground plane, and it exacerbated segregation and separation from the city. No one wanted to live there. The complex was eventually, and quite famously, demolished.”

In addition to the built environment, Velikov noted that design, practices, protocols used to create new spaces also contribute to inequities and inequalities in space.

“A built environment can afford a much more democratic use of space versus a space that is inaccessible. Like a building designed with many stairs, or without ramps, lacking visibility, or wayfinding creates a difficult to access environment,” she said.

Equity and justice are embedded in the built environment through its physical design.

Velikov explained that the iconography of the built environment often perpetuates messages of inequality.

“For example, architecture with Ionic columns that were used for official buildings in the late 19th and early 20th centuries communicates a message of European colonialism and a message of exclusion. This is another way the shape and image of the built environment, of urban space, can exclude certain groups or foster inequalities.”

Traditional street design is another example. “Streets that are designed with narrow sidewalks, or only for cars, exclude a lot of different, important uses. There is a major movement in the field toward ‘complete streets,’ integrated streets, and slow streets, where sidewalks are wider, and different activities can occur on sidewalks. Cars have less privilege. We create bike lanes, new speed bumps, road markings, public transportation shelters, benches, including trees and plantings… things that make the street a place for daily life to occur.”

“So, we think about how designing urban and public spaces that can afford multiple uses for different members of society with different needs improves equity,” she said. 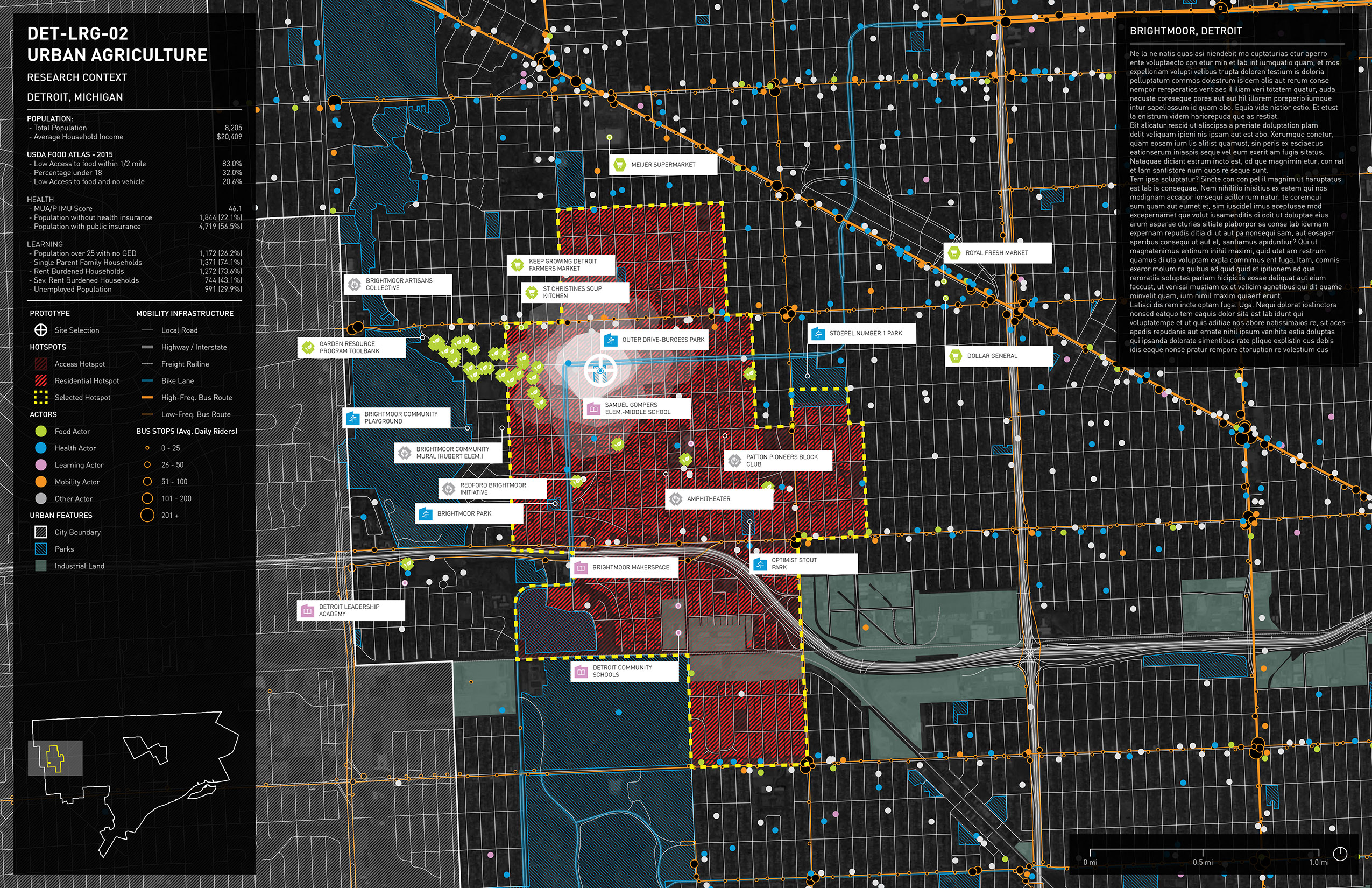 Architecture and urban planning have “always had a social dimension”

Kathy said that she has been interested in these social and equality aspects since her time in architecture school, but really started working on the topic since coming to U-M.

“The real urgency of these questions really started for me when I came as a faculty to the University of Michigan in 2009,” she said. “Before that, I had been living in Toronto and practicing there. When I learned from my colleagues about how people, policies, and spatial contributing factors reproduce inequality and injustice in Detroit, my focus really shifted to addressing these issues.”

Much of Kathy’s work connects across “architecture, the environment, technology, and sociopolitics through design methods that mobilize systems-based approaches and computational design.”

“The systems approach offers a foundational way of thinking that has become part of my work. I approach things through theories of systems and networks. Thinking about things as interconnected, co-evolutionary, dynamic, always in a state of constant formation and reformation – it’s never static.”

Several of the projects Kathy and her research practice have recently completed focus on mobility justice and sustainable development.

“We recently finished a project that focused on mobility justice as a framework of thinking on how to redesign cities through air quality, highway reparations, mobility hubs, self-policed streets to improve social justice in neighborhoods,” she said.

“Another project we’re just wrapping up is a large project funded by the Belmont Forum, Urban Europe’s Sustainable Urbanisation Global Initiative (SUGI), and the National Science Foundation (NSF) with multiple universities internationally focused on the food/energy/water nexus. Through understanding dynamics of food, energy, water, and waste in a city, as you start to plan and design, you consider propositions that would engage in more circular economies.”

“Our group, led by PI Geoffrey Thün, focused on Detroit and started with community interviews and mapping of the city’s networks. We worked through how things like local energy generation, urban farming, local waste processing, and local water capture could operate at much smaller scales. Design is crucial to achieving this, in addition to policy – designing rainwater harvesting, roof top energy generation, urban gardens, urban designs with space for farmer’s markets, urban spaces where food can be processed into products through local startups and businesses, as opposed to the current practice of large-scale farming connected to  major commercial food producers.” 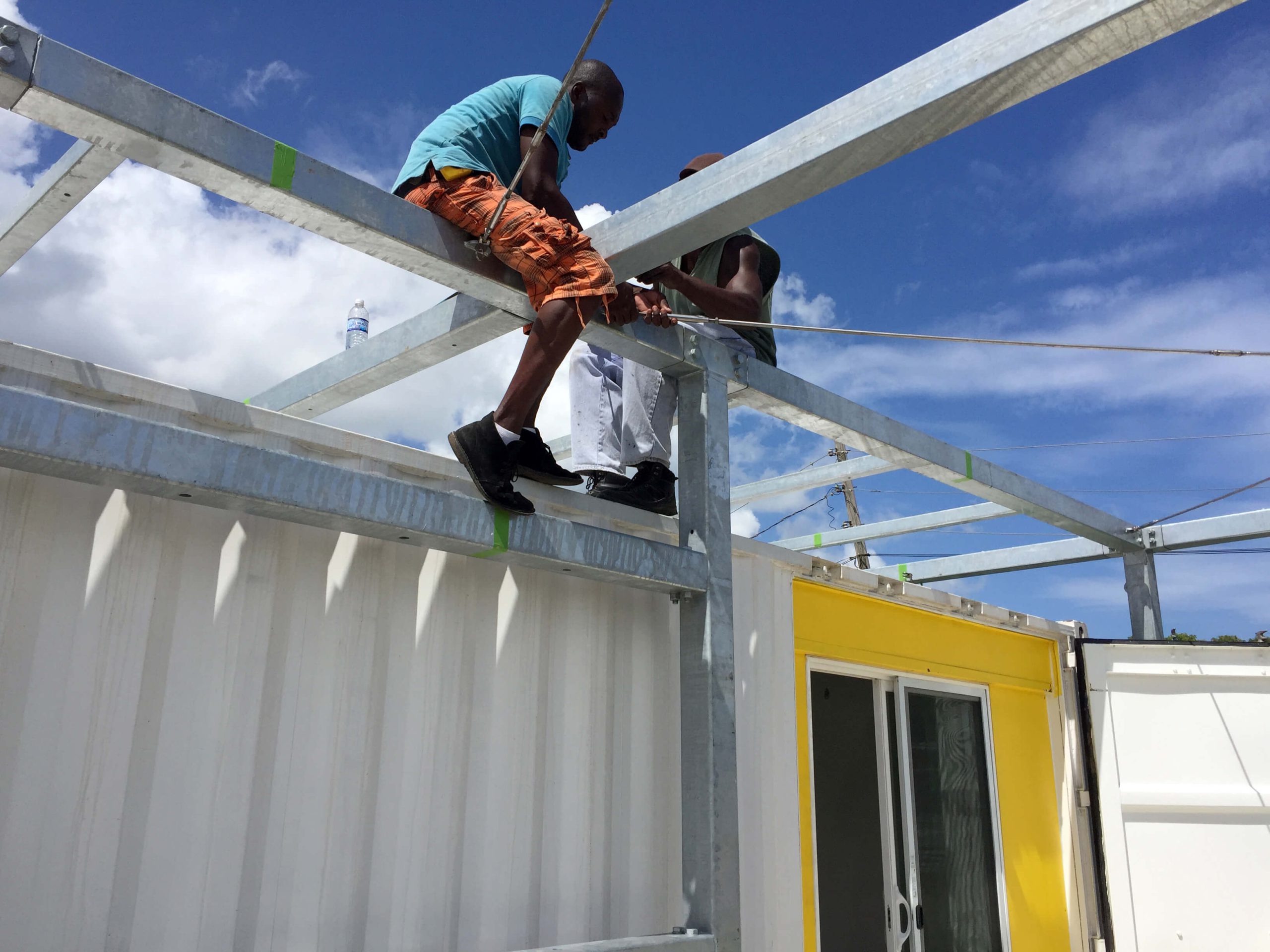 More work to do

Kathy knows there is more work to do when it comes to inequality. “Sometimes, when it comes to trying to solve issues of inequality, people forget that you don’t have to focus on big structural changes to have an impact. Small things can have a big impact.”

Another recent project she and her team completed is the Common_Health+ Clinic in Sandy Bay, Jamaica. It is a prototype container health clinic created to deliver telemedicine and other health services to remote and underserved communities across the globe.

“In Jamaica, one of the major areas of inequality is that there is very little eye care, a lack of glasses and eyesight support. Our colleagues Dr. Joe Meyers from U-M and Dr. Richard Cross from the Eye Health Institute run missions to remote and underserved communities. They provide optometry care, prescribe glasses, perform minor surgeries, to give people the ability to see.”

“We designed a clinic for them because they needed a secure space for the specialized optometry equipment that wasn’t being deteriorated by the saltwater environment.  They also needed a place where the clinic could stay in the community, a para practitioner could be there full time, and continue to provide medical care.”

The prototype in Sandy Bay was so successful a second container-based clinic was designed and built and is now on its way to a community in Montego Bay, Jamaica.

“To have an impact, you don’t necessarily have to restructure everything,” Kathy said. “When you look at inequality systematically, it seems like such an intractable problem. But some of the most effective solutions I’ve seen are the ones that plant seeds of change. Change minds and mindsets, outline different places and systems where interventions can start, and you can make a difference.”

Learn more about Kathy and her work.