They sat down with CID to discuss their inspiration and process. 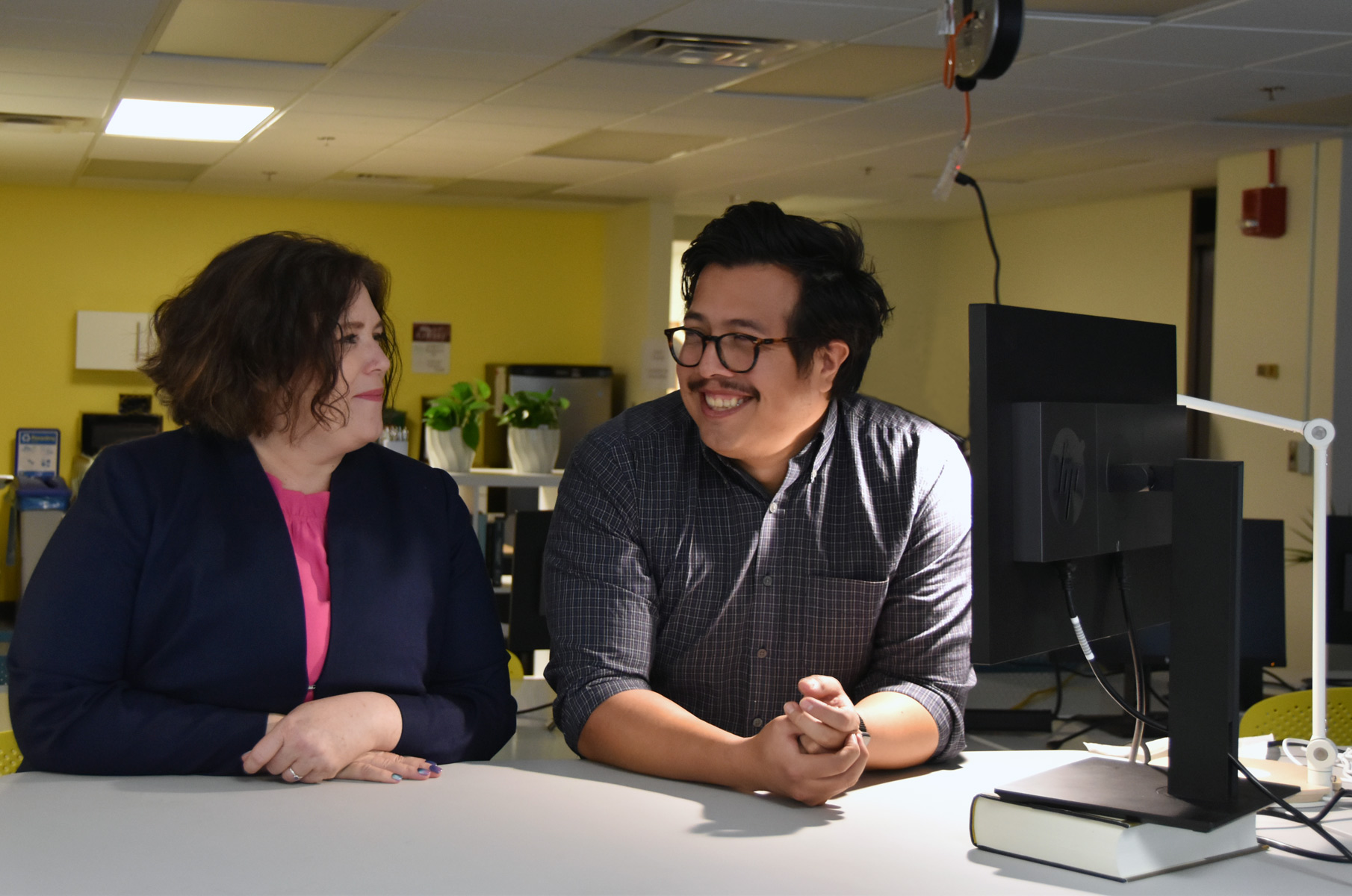 CID: Give us an elevator pitch for this paper.

Shauna: “Our paper looks at trends in college graduation rates for White, Black, Latina/o men and women. We break apart what proportion of the Black-Latina/o and White-Latina/o bachelor’s degree gaps that exist can be explained by differences between enrolling in college and completing college once enrolled. We found enrollment differences explain most of the bachelor-degree gaps.”

“We know from law changes and other research that it has become harder for Latinos to become citizens in the U.S. over time, so citizenship has become more important as a barrier.

The paper is a decomposition analysis that used data from a 70-year period from the U.S. Census. It’s a descriptive finding, but it’s still really useful because that is a huge indicator of where inequalities lie.”

CID: Why was it important to you to study this?

Giovanni: “For me, it’s important because my entire dissertation is focused on these topics. On a personal level, both because I am Latino and my parents are immigrants.  I also went through the educational system here when I wasn’t aware of these issues. It wasn’t until college – through the mentorship of professors at community college – that I became more interested in issues affecting Latinos. Whether it’s labor, immigration, education – they’re all tied together one way or another.”

“My main focus was on education – it’s shifted now, but Shauna and I were both taking a class together and we had discussed my research interest in education.”

“On the professional side, I was and still am very interested in describing and finding out what the sources of these inequalities are that I care about – one of them being education. What we discovered through our paper, and what we hope to continue working on together, is that citizenship status plays an enormous role in what we care about, such as education.”

Shauna: “I think, similar to Gio, it starts from a personal place for me. Coming from a disadvantaged background, I enrolled in college, dropped out, and did not finish until I was 30. Similar to Gio, I had no idea that there were reasons that explained why I struggled so much to finish college. I got into graduate school and was really interested in promoting intergenerational mobility – what are the barriers to getting a college education?  I knew about the issues of first generation students and students that grew up in poverty – these issues are really relevant to me. I wanted to expand that view, and it really showed me how important racial inequality is.”

“Gio and I are native Californians – even though I’m not Latina, it’s such a large portion of the population in California that it is near and dear to my heart. This is a population that I want to see succeed. One of the other motivations is that we both believe there is so little work done on Latinos in comparison to White and Black populations – it’s mind boggling. It’s mind boggling that our paper hasn’t been done before.”

CID: Why do you think that Latino/a education hasn’t been researched to the extent of other populations?

Giovanni: “I think for so long the framing of inequalities has been that the White population has had these advantages for generations. The other group – mostly non-White, Black Americans – have been used as the example. Latinos have a fairly recent history – only in the 1980s Latino became an official ethnic category in the Census. So that could be one of the explanations as to why work like ours hasn’t been done in the past.”

Shauna: “Research always lags behind current events. This is one of the reasons. It doesn’t fully make sense because Latinos have been such a rapidly growing part of the population since 2000, so analysis could have been done earlier, but it has lagged behind.”

“In some ways, actually, it is pretty recent that Latinos have become such a large portion of the population – really in the last 10-20 years. So it’s easy to overlook. Measurement problems are an ongoing challenge – the Census has done a lot of work to retroactively capture the Latino population, but we couldn’t do everything that we wanted to do. For example, we can only know about family ancestry from 1980 onward which means we couldn’t identify from what region of the world U.S. born Latinos’ families immigrated.”

Giovanni: “Also, how the Census categorizes Hispanics is an issue. Even today, they are categorized as White and still considered an ethnic group.”

Shauna: “In comparison to Black civil rights movements there is less activism around Latino rights in most of the United States. California is the main exception – Cesar Chavez and other people in California put in a lot of effort for equality. It has been growing nationally but it’s not there yet.”

Giovanni: “California is one of those trailblazing states for this kind of activism. There is a lot of activism and focus on inequalities that Latinos face in other places aside from California that have been growing more and more recently.”

CID: How did you get started with this?

Shauna: “We get our ideas from what we see around us, but there is a lack of Latino scholars in sociology, due to racism.”

“We talked about writing this paper a lot. I think the initial conversations started in one of our graduate courses in fall 2018, a quantitative practicum in sociology. The professor in the class required that you replicate a paper and then extend it. We found a paper that dealt with educational inequality – it was a paper in Demography from 10 years ago where they looked at educational gender gaps within race among Black and White men and women. They looked at differences in enrollment and completion. Then asked, has mass incarceration impacted Black men’s education? We replicated that paper and then added Latinos to it. When we started looking at Latino gaps by gender, it was the racial aspect that was more interesting. We spent the next six months wrestling with what the explanation would actually have to be. The gender gaps were interesting but we just realized citizenship was the way to go.”

CID: How did publishing the paper help you with your research?

Giovanni: “We presented it at the Inequality Lab, the first iteration of CID. We’ve presented this paper so many times since then. For so long we were just sharing it with our colleagues and workshops here. ”

Shauna: “The process between the first draft and R&R (revise and resubmit) draft was really dramatic. The main story didn’t change, but it has become better from the review process.”

CID: What remaining questions should be addressed by future research on this topic?

Shauna: “We need to do comparisons between Asian immigrants and Latino immigrants. We have to approach it really carefully because of the whole model minority stereotype that’s specific to Asians. They are the model minority – the ‘good’ minorities because they work white-collar jobs.”

Giovanni: “Exactly, because according to this stereotype, they are hard working and not lazy like Latinos. None of these stereotypes are true, but they have been leveraged historically and even today to explain why certain groups are disadvantaged. The reality is more complicated and sourced in generations of exclusion.”

“At some point, I would also like to focus on ‘the Vanishing Latino college student’ – focusing on Latinos specifically. Both among Whites and Blacks, it has been shown that women are receiving more college degrees than men. The same is true for Latinos, as we show in our paper. The remaining question is why.”

Shauna Dyer is a Ph.D. candidate in Sociology. She studies educational and employment inequalities. Her research focuses on inequalities in employment and postsecondary education across gender and racialized/ethnic groups. Her work centers on three strands of research: 1) Job Quality, defined as employer-provided benefits and scheduling option, 2) Racialized/Ethnic Inequality, specifically Latina/o inequality, in the United States, and 3) Intergenerational Persistence via educational attainment. Learn more on her biography page.

Giovanni Román-Torres is a Ph.D. candidate in Sociology and predoctoral trainee at the Population Studies Center within the Institute for Social Research. His research engages broadly with issues of social mobility, stratification, immigration, and spatial inequality, with a particular interest in Latina/os in the United States. His primary research projects employ mixed-methods to study historical changes in recent Latina/o immigrant destinations across the United States, the relationship between Latina/o immigration replenishment and the spatial assimilation of Latina/os in the U.S. South, and how Latina/o immigrants establish a sense of belonging in geographies that are historically Black and White (e.g., the U.S. South). Other research that he is currently engaged in investigates the effects of mobility on individual outcomes, historical trends in the gender gap in college completion among Latina/os in the U.S. and estimating the historical naturalization rates of immigrants in the United States. Learn more on his biography page.